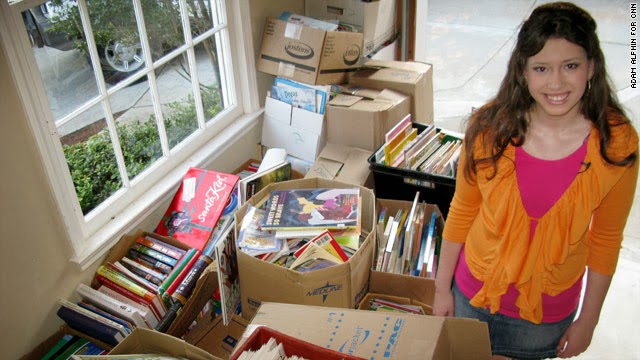 WHY MACKENZIE BEARUP IS EXTRAORDINARY

Mackenzie Bearup is the founder of the non-profit Sheltering Books, which gives away books to kids in homeless shelters and other facilities in the hope of igniting their love for reading. Bibliotherapy was what made coping with Complex Regional Pain Syndrome possible for Mackenzie. Back when she was only 11 years old, Mackenzie’s left knee swelled, prompting her to wear a cast. But long after her knee was back in shape, the pain remained. There’s no cure, she just has to live with it for the rest of her life.

Mackenzie’s grandfather was a double amputee. Although he was stricken with severe pain due to arthritis, she never heard him complain. He was her inspiration. But Mackenzie was destined to do something for humanity even before she developed her lifelong illness. When she was three years old, she asked her mom to fill her Easter baskets with candies so she could give them away to other kids.
She also went door to door to collect footwear for a homeless shelter with her mom. It was not that surprising for Mackenzie to think of putting up an organization that enables her to be of help to others.
"I knew that reading distracted me from my pain. I told my doctor this and she told me about the Murphy Harpst Children’s Center in Cedartown, Georgia. It’s a home for some of the most abused children in the country. They built a library, but had no books. My doctor asked me what I did with my books I no longer needed and asked if I would mind donating them. I decided that I had to do more than that. I asked all my friends and neighbors if they had books to donate. I spread fliers around my community asking for book donations as well. Before I knew it, I was swamped with books! I filled their library to capacity at 11,000 books! I realized that if they needed books, then other places that helped children would need books too. So, I started Sheltering Books, Inc. to do just that!" (SOURCE: Girls Health)

It did not take long before the media picked up her story. She was featured on TV shows and national publications. In 2010, she was named one of CNN Heroes. Although she did not make it to the Top Ten, Mackenzie was honored to be recognized for her noble cause. Apart from that, she was also named Daily Points of Light Winner, Hands on America- Scholastic Books Be Big in Your Community winner, Atlanta 20 Under 20 honoree, Bank of America Local Hero, Examiner.com's America Inspired finalist, and Huffington Post Greatest Person of the Day. P. Diddy called her a hero and she also received the Prudential Spirit of the Community Award.
Now 18 years old, Mackenzie dreams of going to college and completing a degree in Psychology. As if her efforts in Sheltering Books were not enough, she is still aiming to professionally help abused and sick kids. To donate to her cause, please see the Support tab of this profile.