Get to know the Penguin Lady 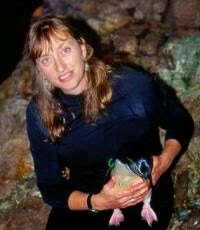 Dyan deNapoli is a penguin expert, TED speaker, and author of the award-winning book, The Great Penguin Rescue. Dyan grew up near the ocean and has always had a deep passion for the sea and for animals. When she first learned about endangered species as a young child, she wanted to do something to help, but felt powerless to do so. She never dreamed that one day she would have the opportunity to do something tangible to help save a species.

Many years later, while working as a Penguin Aquarist at Boston's New England Aquarium, Dyan was a member of the first team of penguin experts to fly to South Africa from the United States to help manage the rehabilitation of thousands of penguins that were oiled when a ship sank near their breeding grounds. Her participation in the dramatic rescue of 40,000 penguins from the Treasure oil spill was transformative and unforgettable. The experience was so powerful that she felt compelled to share the story by writing a book about it.

Published by Simon & Schuster’s Free Press in 2010, The Great Penguin Rescue won a Silver Nautilus Book Award, was named a “Must-Read” Book in the Massachusetts Book Awards, and was selected as “One of the best Natural Science books of 2010” by Library Journal. The New York Post put it on their “Required Reading” list, calling it “an eco-thriller with a happy ending”.

After working closely with penguins at the New England Aquarium for nine years, Dyan founded her company, The Penguin Lady, to teach audiences worldwide about the biology, behavior, and conservation of these unique seabirds. She has been interviewed on numerous radio and TV shows in the US and abroad, including CNN’s Situation Room, the BBC, CBC Canada and Sierra Club Radio. Dyan has been the guest lecturer on nature cruises to Antarctica and the Galapagos Islands and, since 1995, has taught approximately 250,000 people worldwide about penguins. Dyan’s mission is to raise awareness and funding to protect these engaging seabirds – to that end, she donates 20% of the proceeds from her book and from every appearance to penguin rescue groups.