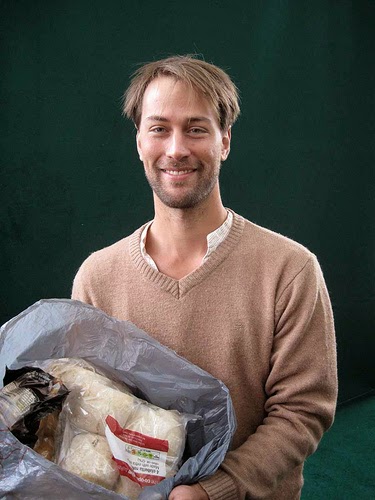 Got this inspirational story from: http://finestextraordinarypeople.weebly.com

Why Tristram Stuart is Extraordinary
Unknowingly, we could be biting off more than what we can chew. In some cases, we don’t even get to touch the food we buy; we buy more than what we need and inadvertently waste resources. Some may think, “so what? It’s my money, anyway.” But it’s not even about money. It’s about being a responsible consumer. That’s what Tristram wants people to understand, especially those from first-world countries where food supply exists on a magnanimous scale.

Being a “Freegan” and “Feeding the 5,000” Tristram became a freegan in his younger years after he ate a type of organic bread with sun-dried tomatoes. That bread was common trash in his garbage collection routines around the neighborhood; he used to feed it to his pigs until he decided to try it one day, straight from the garbage can. Upon realizing that it tasted better than the bread he bought fresh, his eyes were opened to a shocking reality: people are actually throwing away perfectly-edible food. Why is that?

According to him, capitalists have a hand in the way consumers behave. As they feed a buying frenzy, consumers keep buying and end up throwing a lot of excess away; the same is true for grocery stores and restaurants. International trade policy, also, is not helping. Farmers tend to lose a lot of money due to the aesthetic standards enforced on the market; bananas that are too small are left to rot, and vegetables with even little dirt on them are thrown away. Taken collectively, this comprises a good part of the food waste and food loss that we now experience.

To help mitigate this problem, Tristram started the “Feeding the 5,000” initiative. From the food that freegans took out of bins, they cooked delicious lunch. How much food we waste and lose contributes to the warming of the planet. If we don’t dispose of it properly using sustainable procedures, like feeding excess food to animals, it will continue to emit carbon dioxide as it decomposes. Also, animal feeds are now mostly procured from soy and grains. We denude forests to plant food for our livestock! As consumers, we should only buy the things we truly need. Then, the international trade system should also discourage food waste by easing up on the physical aspect of the produce.

How long will Tristram be a freegan? Well, he says he will be as long as he sees food wasted. So, try to finish your food, because that very act has an indirect effect on the hungry population of the planet.