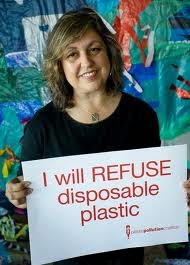 
WHY DANIELLA RUSSO IS EXTRAORDINARY

If you are a parent, would you feed your children plastic? “Of course not!” No parent would. But did you know we could be doing it inadvertently by allowing plastic to populate the world? Experts estimate that by 2050, we could be producing over one-trillion pounds of plastic each year, in accordance with today’s 4-5% rise in plastic production. How do we reverse our fate? Daniella Dimitrova Russo is doing what she can through “Think Beyond Plastics” and the “Plastic Pollution Coalition.”
Her work in the environmental field began after seeing a mother albatross feed her young with food from the Pacific Garbage Patch. It was a sorry scene; we are truly drowning in our own wastes. In the name of convenience, we are putting our children’s future at risk. Plastic particles are found in our oceans, ingested by our aquatic resources, and are polluting the food chain. Like the albatross, we don’t want our kids to be eating plastics. But do we have a choice?

Daniella explains the goal of the project they started in 2009:
"Our vision is a world free of plastic pollution and its toxic impacts on people, animals and the environment. Towards this goal, we work to eliminate disposable plastics, and reduce the planetary plastic footprint. This is only possible through the combined efforts of individuals, organizations and businesses, and so we have formed the Plastic Pollution Coalition to create a common goal. We all work to educate the public on the issues with plastic; to encourage policy-makers to support our efforts and also to provide long-term economic incentives to businesses that invest in alternatives to plastic; and to form a global, international alliance." (SOURCE: 7x7)
The “Plastic Pollution Coalition” has partnered with organizations and businesses to realize sustainable ways of life without relying on plastic. With leaders joining them from around the world, the plastic problem is now being pushed towards the world’s top issues which demand immediate action. Since the 1950s, the plastic industry has experienced a steady boom and our production has increased by 10%, causing tremendous problems like flooding and pollution which are more pressing now than ever before.

“THINK BEYOND PLASTICS” AND THE “GMO-FREE MONTEREY COUNTY”

The first of Daniella’s initiatives was “Think Beyond Plastic,” an award-winning global organization. In 2009, “Think Beyond Plastic” won “Best 360 Campaign” at the Jackson Hole Film Festival. In the same year, she launched “GMO-Free Monterey County,” which is "dedicated to raising awareness of the dangers of genetically-modified foods to the agricultural bounty of Monterey County. It incorporates a web site, numerous film screenings, a film festival and many other public events. Today, GMO-Free Monterey County collaborates with state-wide efforts to ban GMO crops, and to enforce labeling laws." (SOURCE: Daniella Russo)
Feel free to support Daniella’s cause if you love your children and your planet.