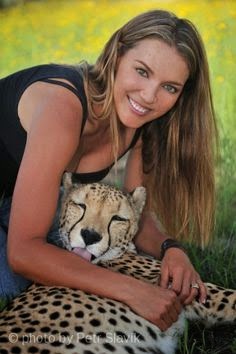 WHY MARLICE VAN VUUREN IS EXTRAORDINARY

Marlice van Vuuren has the looks of a model. Google-ing her would give you the impression that she was a celebrity before she became a conservationist, but further reading belies that notion. Marlice has been a woman of the wildlife ever since she was a kid; it’s her love for animals that catapulted her to celebrity status. Angelina Jolie discovered her wildlife sanctuary when she filmed “Beyond Borders” in 2002. She fell in love with the place, and even gave birth to her child, Shiloh, in Namibia.

The Naankuse Foundation was established by Marlice and her husband, Rudie van Vuuren, in 2006. They focus on:
• A Lifeline Clinic which provides free primary healthcare and an ambulance service to the San community in Epukiro, in rural east Namibia. On average around 3,500 patients are seen each year, 84% of whom are San with 45% being children (a quarter of whom are under 5 years old). This is a vital service for this remote marginalised community.
• The Clever Cubs Pre-primary school which provides education to 11 children and support to a further 16 children who are in mainstream schools in Windhoek. These children are all family members of our employees and largely from the San community.
• Employment on all our sites for the San community.
• A wildlife sanctuary that rescues and rehabilitates orphaned or injured animals. Where possible we re-release these animals. If release is not possible we provide a loving home for these ambassador animals who help us to teach people about conservation.
• A carnivore research project which provides consultancies to farmers and landowners and advises them on issues of carnivore conflict mitigation. (SOURCE: TFWA)

MARLICE - A VISION FOR AFRICA

In 2008, Philip Selkirk discovered Marlice’s and Rudie’s work, and was taken by Marlice’s personal struggles in achieving her goals. The documentary “Marlice – A Vision for Africa” tells her captivating story, from tending to her animals at the sanctuary to living a harmonious life with the San Community.
But even with help from the Jolie-Pitt Foundation and other partners, the couple still wants to do so much more. They are hoping to protect more animals and are looking into expanding their sanctuary so that wild lions, tigers, hyenas and cheetahs can roam freely and co-exist. Indeed, Marlice is a true-blue African.