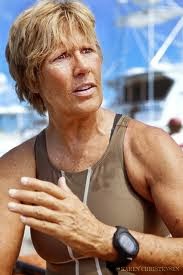 Over two days in 1979, Nyad swam from Bimini to Florida, setting a distance record for non-stop swimming without a wetsuit that still stands today. She broke numerous world records, including the 45-year-old mark for circling Manhattan Island (7 hrs, 57 min) in 1975. She was inducted into the National Women's Hall of Fame in 1986. Nyad was inducted into the International Swimming Hall of Fame in 2003.

She provides a weekly five-minute radio piece on sports for KCRW called The Score (heard during KCRW's broadcast of NPR's "All Things Considered"), as well as for the Marketplace radio program. She formerly hosted the public radio program "The Savvy Traveler."

In 2009 she narrated the documentary Training Rules.

On July 8, 2011, the U.S. gay sports website CompeteNetwork reported on her plans for the 2011 Cuba-to-Florida swim, writing that "(the) amazing Diana Nyad is a living legend in the swim world, and a role model for the GLBT community..." Nyad is openly lesbian.

In September 2011, Nyad announced that she would attempt the Cuba-to-Florida swim again in 2012.

In 2011 she told a reporter that, in contrast to her youth, her drive as a swimmer is no longer propelled by attempts to work through the anger manifest from sexual abuse she suffered as a teenager.

In 2012, she was the subject of the short documentary "Diana" by the digital channel WIGS.
Posted by Unknown at 5:40 AM