The Biography of Jackie Chan 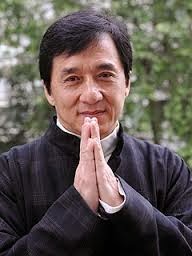 Long before he became an international household name, Chinese superstar Jackie Chan had smashed box office records throughout Asia with his trademark mixture of action, humour and precisely choreographed stunts all performed by Jackie himself.
And in 1987, already a millionaire, the martial arts expert was ready to take America by storm with what turned out to be his breakthrough film in the West, Police Story. "After a few similar movies, the US audience will begin to know me," he predicted. "Then it will be Jackie, Jackie, Jackie all the way."
And the Rush Hour star born Chan Kwong Sang in Hong Kong on April 7, 1954 was right. But the path to global stardom proved a long one for the former stunt man, who, as legend has it, was nearly sold to the doctor who brought him into the world by his parents, who were desperate for food money. His mum and dad, however, eventually got back on their feet after finding jobs cooking and cleaning at the French consulate. "I actually have the French government to thank for my present-day physique," Jackie once said. "My father, as head cook, would always save the best cut of steak for me, his only child."
Aged six, Jackie moved with his family to the Australian capital of Canberra to work for the US consulate, but Chan junior was soon sent back to Hong Kong to study at the Chinese Opera Research Institute in Hong Kong. There, he faced gruelling days which started at 5am and ended at midnight, while undergoing rigorous training in singing, martial arts and acrobatics.
By the late Sixties, after a visiting filmmaker offered him a job as stunt man in a Chinese action film, Jackie was taking on largely uncredited roles in films such as Bruce Lee'sEnter The Dragon and Fists Of Fury. After Lee's sudden death in 1973, one of his former directors, Lo Wei, cast Jackie in several films, aiming to promote him as the next incarnation of the icon.
Jackie, however, had other ideas. "I wanted to be like a Chaplin or Buster Keaton, but all the martial arts directors wanted me to copy Bruce Lee. So after I got famous I started to change a lot of things... I decided, when Bruce Lee kicked high, I'd kick low. When Bruce Lee yowled, I'd punch doing a funny face like it hurt. Whatever Bruce Lee did, I'd do the opposite."
This blend of slapstick and action and the fact he performed all his own stunts helped him strike box office gold with his breakthrough hit Drunken Master in 1977. After briefly working Stateside in 1980 (he had a bit part in Burt Reynolds' road comedy Cannonball Run), Jackie spent the Eighties mining his winning streak in Asia, where his big-budget stints as both actor and director earned him the title "a local Steven Spielberg".
He also became a major sex symbol; and many a female heart was broken when he married Taiwanese actress Len Feng-Chiao in 1983. The couple, who were briefly estranged in 1998 after Jackie had a child with former Miss Asia, Elaine Ng, has one son, aspiring singer Chan Cho-ming, also known as JC.
Jackie's risky on-set stunt work which is featured in out takes at the end of his films has not been without consequences. He is said to have broken nearly every bone in his body at one time or another, and permanently lodged a piece of skull in his brain after a 45-foot fall in Yugoslavia while filming Armour Of God, an accident which also caused him to lose some hearing in one ear.
Now in his late 40s Jackie admits he may be slowing down - but he's definitely not stopping. "Fights and stunts take me longer to do, but I have no choice," he says. "My life is the movies."