The Founder of Fondation Franz Weber 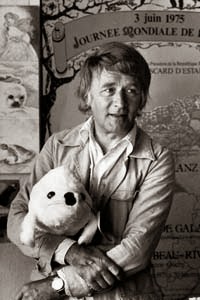 An interesting and inspiring story taken from:

Franz Weber is an environmental activist, author, and animal rights activist who is most-known for his conservation work in the seventies and eighties, as well founding Fondation Franz Weber, a non-profit organization dedicated to the protection and preservation of the environment and the wild life. Throughout his career, Franz has established a reputation for being one of the most significant names in the field of environmental activism, having spearheaded successful environmental campaigns around the world.

A true champion of animal welfare and environmental conservation, Franz has received numerous accolades and recognitions for his work. Among these include being named as Delphi’s “Citoyen d’Honneur”, the City of Austin’s “Weber Honorary Citizen”; receiving the German Medal of Environment and the German Prize for Conservation of Nature; as well as winning the Hans Adalbert Schweigart Medal from the World Union for the Protection of Life. These, among all the other awards that Franz has received all throughout his career prove just how significant he has been in advancing the causes of environmental protection and animal welfare.

Since he was young, Franz has seen the different problems that have plagued mankind all throughout history. Being a survivor of the Second World War gave Franz the desire to help his fellow man by making sure that there is a world for the future generations to enjoy. This is why Franz greatly emphasizes in taking care of the environment. For him, nature is one of the greatest treasures that we can leave the next generation with – a treasure that would sustain mankind for years and years to come.

Even though the issue of environmental protection and animal welfare seems too huge for Franz to resolve in his lifetime, he does not allow these factors to prevent him from doing his part. Franz understands just how important each person’s role is – that no matter how small your efforts are, as long as you act, you can make a great impact. This is why Franz believes that in spite of the numerous horrors that humanity has faced throughout history, they are still able to overcome the challenges because there are those who stand up and do their part in pulling everyone up from the ditch.

FRANZ WEBER’S IMPACT TO THE WORLD OF ACTIVISM

The world owes much to Franz Weber for his undying efforts to ensure the protection and preservation of many of nature’s greatest wonders. His work has not only impacted the places that he fought to protect, but it has also brought forth a new generation of environmentalists who are being inspired by his actions. And while Franz knows that there is still much to be done, he does not relent – for the sake of the future generations, he continues to fight, as long as he has life in him.

“We do not want to live in darkness. That’s why we fight ahead until the decent morning dawns. And it will dawn, sooner or later. I wish for us all that it dawns sooner, not later. Much to the salvation of our children. And especially also for the salvation of our fellow creatures.”
Posted by Unknown at 1:15 AM