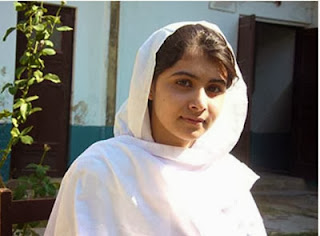 Malala Yousafzai was born on July 12, 1997, in the town of Minogra in Pakistan. Minogra is located in the war-stricken Swat region. The swat region is under the control of the afghan branch of Al- Qaeda, the Taliban. Malala was first educated by her father Ziauddin Yousafzai, who was the superintendent of the local chain of public schools and a educational activist himself.


In January of 2009 the Taliban imposed a ban on all girls going to school, to go into effect on January 15, 2009. Malala Yousafzai decided that she had had enough, she became a blogger for the BBC. She would hand-write notes that would be passed to the local BBC reporter who would scan and email them to the headquarters of the Pakistani BBC branch who would then publish them. This would ultimately lead to her world-wide fame.

After banning girls from attending school the Taliban commenced a campaign of destruction, destroying over 100 all-girl schools in the swat region. Later that year the Taliban lifted the ban, but only in cases of co-education. Malala continued to fight for her right to education, her actions were not appreciated by the Taliban leadership yet, they were very appreciated by the international community. During this she continued her tenure as a BBC blogger and relished the opportunity to gain attention to her cause. Sadly shortly after this in February of 2009 she stopped her correspondence with the BBC  as the population of the Swat region fled as  the conflict between the government and the Taliban once again erupted onto conflict. Her family split up and sought refuge in refugee camps waiting for the all clear to return to their home.
This came in on July 24, 2009 when they finally returned home. At the same time, Malala was approached by adocumentary crew interested in making a documentary about her eventful life. This documenatary was titled Class Dissmissed, and was


republished by the New York Times.
Malala's fame grew, in October 2011, she was nominated for the  International Children's Peace Prize by The Most Reverend Desmond Tutu, sadly this fame came at a cost the Taliban issued death-threats that appeared under her door and on  her Facebook wall. In a Taliban metting held the summer of 2012, the Taliban unanimously agreed to carry out their threats and kill Malala Yousafzai.