The Founder of Ebay

I got this amazing story from: www.squidoo.com/pierre-omidyar 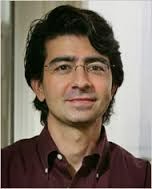 Pierre Omidyar. One of the wealthiest people in the world because of his creation, eBay, and yet also one of those who has given over half of his wealth to help people through his organization, the Omidyar Network. A true manifestation of the saying, ?blessed to be a blessing?, Pierre is not only one of the leading technologists in the world today but is also one of the biggest names in the world of philanthropy.
ACCOLADES AND RECOGNITIONS
Ever since he started his career as a technologist, Pierre has already earned a great number of awards and accolades that prove just how extraordinary he is as a person. He was named as a Global Leader by the World Economic Forum, included in the Slate 60 list for six consecutive times, and was named as one of the Greatest Entrepreneurs of All Time by Businessweek Magazine just to name a few. His achievements both in the business and philanthropic world is worth mentioning, as through his organizations he has become one of the revolutionaries of using technology to change the world for the better.
A TECHNOLOGIST BY ORIGIN, A PHILANTHROPIST BY HEART
A technologist by origin and training but a philanthropist by heart, Pierre believes that the reason technology exists is so that it could be used for the betterment of mankind. And through his work with eBay and the Omidyar Network, Pierre is proving just that. Not only is eBay one of the most successful and largest websites in the world, but it has also become significant in the dawning of social media, connecting people from everywhere in the world.
Pierre has always believed in the power of connecting people, and this is why he really poured out his heart into eBay and the Omidyar Network. For Pierre, when people are brought together, no matter how physically limited they are, they can begin working together and accomplish great things.
In an interview, Pierre states:
It's all about connecting people. That's the first step. It's enhancing the richness of connections between people. What's interesting about all these things is that once people are connected, they're discovering some power. They're discovering that they can contribute to a community, which is an empowering experience. They're discovering that they can help influence ideas, that they can create powerful tools that other people can build on, that they can create content that other people value. It's the same human mechanisms at work across these very different entities.
Behind Pierre's success story is his amazing passion. He just loves what he does. When he was young, he found what he wanted to do for the rest of his life, and he poured all his heart and soul into it. For him, this is the secret to success ? being passionate at what you do.
As he says in an interview:
I say that you should pursue your passion. If you're passionate about something and you work hard, then I think you'll be successful. If you start a business because you think you're going to make a lot of money at it, then you probably won't be successful, because that's the wrong reason to start a business. You have to really believe in what you're doing, be passionate enough about it so that you will put in the hours and the hard work that it takes to actually succeed there, and then you'll be successful.
Failure has never stopped Pierre from achieving his goals. In his career, he has encountered several issues here and there, but he always focused on the target. For him, failures and disappointments should never become a stumbling block to get you to quit, they should become stepping stones for you to rise higher. Learn from them, and keep moving forward.
Pierre says:

Just go and do it, try it, learn from it. You'll fail at some things, that's a learning experience that you need so that you can take that on to the next experience. And don't let people who you may respect and who you believe know what they're talking about, don't let them tell you it can't be done, because often they will tell you it can't be done, and it's just because they don't have the courage to try.